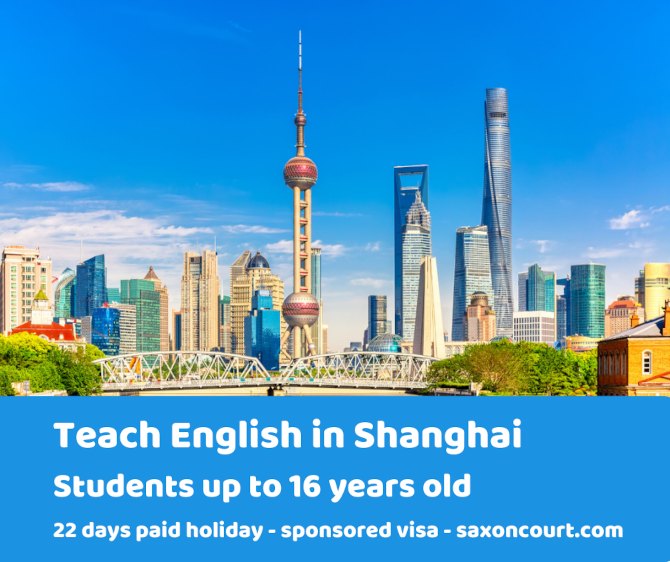 < Back to Job Board

Perfect for new teachers, the school specializes in young learners with classes for all ability levels. You will get comprehensive training and you can expect a professional – yet welcoming – atmosphere.

The school is located in the district Qingpu in Shanghai, China’s biggest and most exciting city. Home to a bustling international business community, there is no shortage of English learners and fellow expats who also came to teach English in China. Teaching in Shanghai will give teachers a leg up in top-tier language instruction or springboard them to ever more exciting things.

A western Academic Manager will assist you at work and with getting settled into your social life in China.

Apply Now
All Jobs in China

Shanghai is the definition of a megacity, and home to one of the country’s most international communities. Many foreigners came here because they wanted to teach English in China. As a commercial and cultural center, it rivals the likes of Paris and New York with a uniquely Chinese take on international success.

Despite Shanghai’s urban sprawl, the city boasts green areas throughout. The architecture – new and old – is breathtaking and worth multiple visits to the city center. Stand-out areas are the Bund’s riverside area, Nanjing Road’s shopping district, and the French Concession. Transportation is cheap and convenient.

Shanghainese food is a melting pot of various regional influences, with many Chinese styles being served and combined in exciting ways. The city’s true cuisine features mellower, sweeter flavors than other types of Chinese cuisine. There are several varieties of chili paste that are to die for.

While you teach English in China you also want to have some fun right? So what do expats do for fun? Shanghai has everything from an exciting bar scene with live music acts to street markets that go late into the night. An active expat community means that there are activity groups for pretty much every imaginable hobby – and probably a few new ones for you to discover.

Shanghai’s central location among the outlying cities of the Yangtze River Delta make it an ideal starting point for day trips, weekend excursions, or longer vacations. Within just a short train ride, you can visit Nanjing, Yangzhou, Ningbo, and many other cities.

The District of Qingpu

The district of Qingpu, where the school is located, allows for a superb quality of life. Qingpu has most of the amenities of downtown Shanghai but has a slower pace and more of a Chinese ‘feel’. Living downtown can often feel like you are in just another western city, but Qingpu never lets you forget that you are living in China.

Many foreign staff members have chosen to make a cute, developing 500 year old canal town called Zhujiajiao, 12 kilometers to the west, their home.

The cost of living in either suburban town is 30-40 percent cheaper than it is living downtown. While you teach English in China you’ll have money left to travel around the country and nearby countries, pay off student loans, or start a nest egg.

How Far Will Your Salary Go?

According to numbeo.com, here’s what you can expect to pay in Shanghai:

The school offers a great place for teachers to start their ESL career. Children aged 3-16 years can take a range of tailored courses here.

Wherever you teach English in China, it’s all about the students! Thousands of children are practicing English with this school, being able to chat with foreigners after as little as 180 days of study.

There are 16 campuses spread across Shanghai and more than 70 foreign teachers from a variety of different countries, many who have been with the school for years.

The school has a friendly and professional working environment on their campuses and is looking forward to welcoming their next new team member!

Jaco is one of the most experienced teachers at the school, joining in 2017. Before he came to China he taught English in South Africa. Jaco’s advice to new teachers is to try all the local food and enjoy the experience of living in one of the most fascinating countries in the world.

When Jaco is not teaching, he enjoys walking around the city and tasting the variety of local flavors available in Shanghai.

“It’s a great place to work at. I have been working here for more than 3 years and I love it. The school is very helpful to provide all the training I need for the position and the Chinese staff are also very helpful and friendly. We often go out for dinner and always have a great time.”