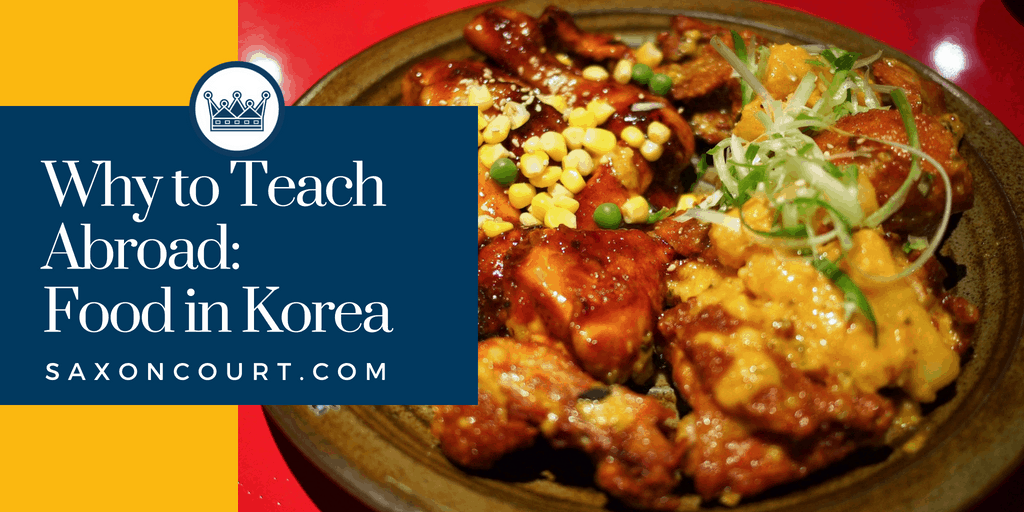 Why to Teach Abroad: Food in Korea

Everybody needs food, and here we look at the options for feeding oneself in the Republic of Korea (ROK), also known as South Korea.

Korean cuisine uses a lot of seaweed, fish, chilli, garlic, and salt, without much else. Some people love the spiciness, but at times it can seem like a contest of endurance.

Many non-Koreans find it difficult to adjust to what’s on offer and spend a lot of time hunting non-Korean goodies. There is also the added complication of group dishes vs. individual dishes when you’re eating out.

Here’s a short guide as to what suits a non-Korean palate, and what can be eaten alone or as part of a group.

Dishes or places to eat alone, or eat different things than your friends

Samgyetang (삼계탕) – Chicken soup. A whole small chicken boiled up with vegetables and ginseng. Often cited as something to eat when you’re sick, not at all spicy. Price range approx W5000-6000

Jeong-shik (정식) – A selection of side dishes with some meat or fish. The meat or fish served varies by restaurant, but the restaurant will usually be set up to serve one kind of animal to larger groups. The price is W4000-7000 dependent on what’s served.

Ja-Jang-myeon (짜장면) – Black bean noodles. This dish is found in Koreanized Chinese restaurants everywhere in Korea. Chinese places are good for the solo eater, as all the cheaper stuff on the menu is intended for one person. W4-8000, anything more expensive is usually intended for 2 or more. Other Chinese options include japchae (잡채) which is usually referred to as chop suey in the west, and bokkeumbap (볶음밥) or fried rice.

Kimbap Nara/Kimbap Cheonguk (김밥나라/김밥천국) – These are chains of cheap eateries, found in pretty much every neighbourhood in Korea. Everything on the menu is intended for one person. Favourites include kimbab (김밥-essentially California rolls), mandu (만두) which is a dumpling, spicy ramen noodles(라면), omurice (오무라이스) which is fried rice wrapped in an omelette, and donkkas (돈까스), which are fried and breaded pork, similar to schnitzel. All dishes will come with a side of Kimchi. Prices range from W2000-7000.

Places to eat with friends

Korean BBQ places are designed for groups of at least two to eat together, cooking the food at the table. Different places specialise in different kinds of meat or fish.

Dak-galbi (닭갈비) – Chicken breast in a spicy sauce, cooked in a giant frying pan with sweet potatoes, perilla leaves, onions, and cabbage. Some places will top it with cheese and ramen if you ask, and will often tone down the level of spice for you.

Yang Gochi (양꼬치) – Lamb on skewers. These restaurants are run by actual Chinese people living in Korea, and they tend to be in the poorer parts of larger cities. These places are completely different to Koreanised Chinese restaurants serving jjajangmyeon. However the food is fantastic, and if you’ve got a hankering for some lamb, it’s pretty much the only option, as it doesn’t feature in the Korean diet.

Look for the sign 串, which is the Chinese character for skewer. 羊肉 is the Chinese for lamb. The menu inside will usually be in Korean and Chinese. From around W10,000 per person. These restaurants also usually serve a range of larger side dishes at around W8000-10000 each.

Very few Koreans understand the concept of vegetarianism, although observant practising Buddhists often understand veganism. If you are willing to compromise and eat fish, you’ll have no problem eating out in Korea. However, if you are unable to come to terms with this, then there are a few options.

Firstly, there is a chain of restaurants by the name of Loving Hut. These places are 100% vegan. Every sizeable city has a Loving Hut. The second option is a visit to a larger Buddhist temple for some temple cuisine. Some temples specifically serve food to raise funds for their other activities. However, even if you do compromise, it would be wise to bone up on your veggie cooking skills before coming to Korea. Read on for grocery shopping advice.

This list is by no means exhaustive, and pretty much everyone finds something to their liking. Just don’t fall into the trap of finding you dislike most Korean food, and then start eating at Pizza School (a cheap takeaway pizza chain) every night, packing on the pounds in the process. If this happens, then it’s time to learn to cook.

Fresh seasonal fruit and vegetables are abundant in Korea, and the best prices are at markets and smaller grocery stores. The large chains (Emart, Homeplus and Lotte Mart) have silly prices for fresh food. Alternatively, you can also top up with some smart online shopping.

ExpatMart.co.kr is a great resource. They are primarily targeted at factory workers from south and south-east Asia in Korea, but the site is all in English, and they also carry a good selection of Costco’s goods. They will deliver anywhere in Korea, and delivery is free over W70,000 (free delivery excludes islands and remote rural areas).

My personal tips for buying from here are the frozen chicken breasts (cheaper than a regular supermarket), curry powder, Costco cheese, chick peas, and tortillas. The site is also good for buying things to liven up vegetarian and vegan cooking in Korea.

IHerb.com will also ship speciality health food products and spices to Korea, and they often have promotions on their shipping rates. If you see a promotion, it’s wise to stock up there and then.

Dean Brown is a UK national living in Korea. In his eight years there, he has worked as both a teacher and a journalist.

Do you have a favorite Korean dish, either at home or abroad? Let us know in the comments below!