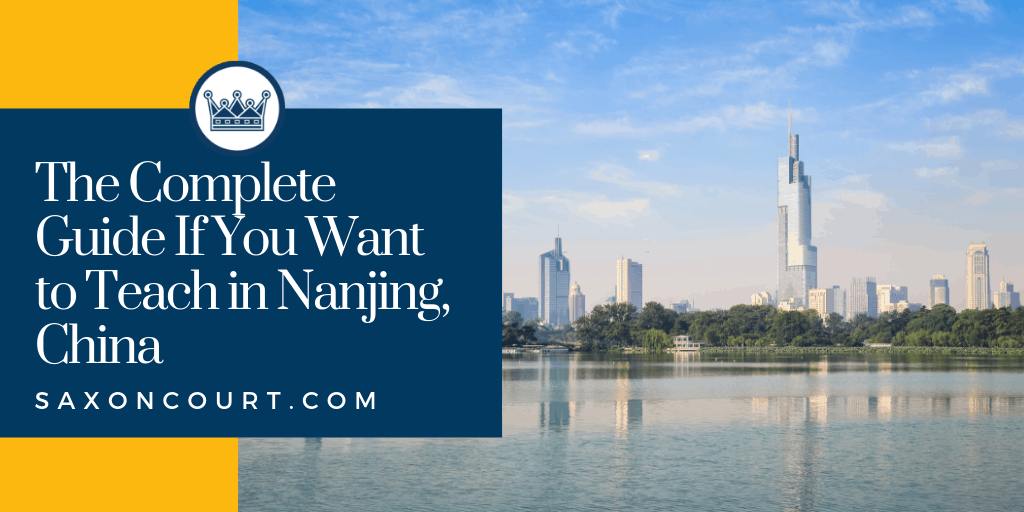 The Complete Guide If You Want to Teach in Nanjing, China

Lots of people who decide to teach in China only think about living in the main cities. And there are several good reasons for that. Beijing and Shanghai are exciting international cities, where there’s always something new to see and do. But if you’re looking for a richer and more authentic dive into Chinese culture, then you need to visit one of the smaller cities. And that’s just one of the benefits of choosing to teach in China, Nanjing.

Nanjing is the capital of the Jiangsu province in China. It’s on the south bank of the Yangtze River and has an important place in Chinese history. Over 8 million people live in the city itself while there’s more than 30 million living in the surrounding cities and areas, known as the Nanjing Metropolitan Region.

You’ll be able to explore this city’s long history when you decide to teach in China, Nanjing. The city served as the capital of Chinese dynasties, kingdoms, and republican governments between the 3rd century and 1949. This made it an important center for education, research, economy, culture and politics for centuries. It’s now a popular spot on the tourist trail because of the remaining historical and cultural attractions.

Nanjing is located in East China and is known as one of the four hottest cities in the country. Summer is from June to August and the temperatures can reach between 35 and 40 degrees Celsius or 95 to 104 Fahrenheit. Summer is also the rainy season in Nanjing, with between 20 and 30 rainy days over the summer period. This can make it quite uncomfortable for travellers and you will need to protect yourself against the sun when you decide to teach in China, Nanjing.

Winter in Nanjing is cold and humid, and you will need lots of warm clothes. The temperature can drop to as low as -5 to 2 degrees Celsius or 23 to 36 degrees Fahrenheit. Nanjing sometimes experiences snow in December, which makes the city look amazing. However, pollution can be a problem in winter, when the air becomes smoggy.

The best time to visit Nanjing is between March and May when the flowers are in bloom and the weather is neither too hot nor too cold. September to November, when the leaves change colours, is also a beautiful time to be there.

Why Teach in China, Nanjing?

Lots of schools in China need English teachers, so you’ll probably have your pick when you’re choosing a city to live in. Here are just some of the reasons for choosing to teach in China, Nanjing:

What to See in Nanjing, China

Nanjing has a long and fascinating history that you can experience and explore when you decide to teach in China, Nanjing. Some of the most interesting and popular attractions in the city are:

This is a must-see historical site in Nanjing. Dr Sun Yat-sen is often called the “Father of Modern China” as he helped put an end to the 2000-year-old monarchical system and usher in a new era. There are also other landmarks in this area including the Music Stage, the Memorial Archway of Universal Fraternity, the Depository of Buddhist Texts, the Sacrificial Hall, and Sun Yat-sen’s Academy.

This memorial to the victims of the Nanjing massacre during the Second World War is a sobering but important reminder of the struggles of this great nation. More than 300,000 civilians were killed during the massacre, many of them in horrendous ways.

This is the largest castle-style city in China and the most complicated castle in the world. A true architectural marvel.

Referred to as the “Pearl in Nanjing”, this is the only surviving royal garden south of the Yangtze River.

One of the Four Famed Mountains in South China, the peaks of this mountain are often enveloped in purple and golden clouds at dawn and dusk. Experiencing this strange phenomenon in the lush natural surroundings of the mountain is an incredible experience.

What to Eat in Nanjing

The food is one of the best things you’ll experience when you teach in China, Nanjing. The food in Nanjing is known as Jiangsu Cuisine, which is based on elaborate cooking and exquisite shaping and colours. Jiangsu cuisine is one of the most influential and popular in all of China.

Some of the best dishes in this region are:

There are many more popular dishes in this city, which you’ll have to discover for yourself when you choose to teach in China, Nanjing.

Gayle Aggiss an ESL teacher and a dedicated traveller. She’s taught in Fuzhou, China and Hanoi, Vietnam. She much prefers smaller cities to the larger options. When she’s not on the road, she lives in Perth, Australia. I write about education, ESL teaching specifically, and you can view more examples of my work at www.gayleaggiss.com.