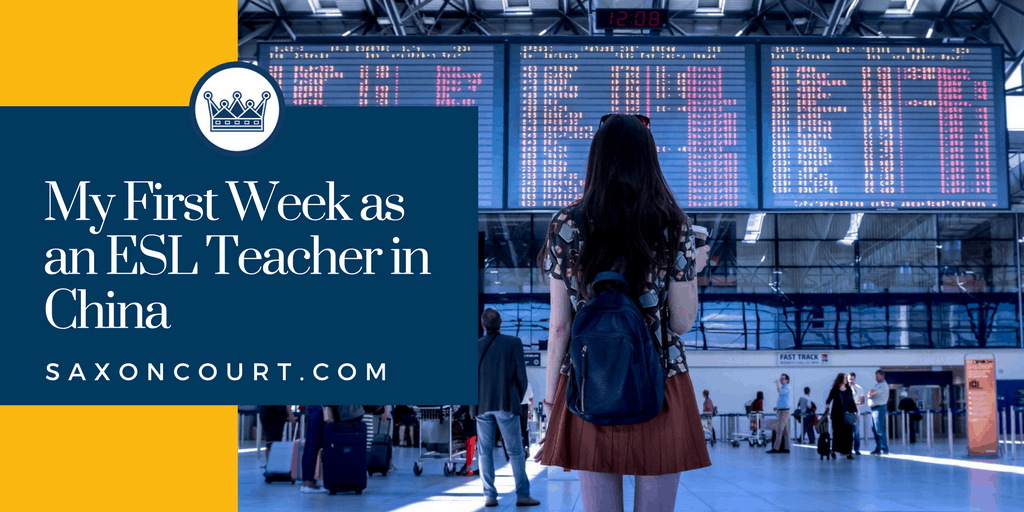 My First Week as an ESL Teacher in China

Landing in China for the first time is a shock, no matter where you enter. Chinese cities, and their airports, are crowded no matter what time of the day it is. When you’ve been in transit for more than ten hours, it’s overwhelming. But despite the crowds, they’re fairly organised. The lines through customs move quickly, with only a few curious stares.

I landed in Fuzhou after midnight. I was moving there for a year to teach English in a private school. Fuzhou is a relatively small city and tourists never go there. That means that most of the people in the airport and on the streets had rarely seen a white woman outside of television. They stared, constantly. That was to be one of the themes of my first week in China, and of the rest of my stay as well. People would follow me around staring, run into poles on their bikes because they were staring, and take videos on their phones as I walked past them on the streets. It took a long time to get used to this.

The Importance of Support

I cannot overemphasise how important is to choose a school that offers good support during your first week. Everything is strange and new. The simplest things that you take for granted at home suddenly become nearly impossible. During my first week, I couldn’t work out what was a good price for anything, how to order food from restaurants unless their menu had pictures, and kept getting lost because street signs meant nothing to me.

Having support and help from your school and workmates makes all the difference. I was picked up at the airport by someone from my school and taken straight to the apartment that would be my home for the next year. They showed me how to work the various devices in my apartment and how to set up and use the mobile phone they gave me. Over the next week, they showed me different restaurants, gave me tours around my new neighbourhood, and took me shopping. The first week would have been a lot harder without that support.

The First Week of Teaching

I also started teaching in the first week. The first class was a trial class and I was so nervous that my legs were shaking as I walked down to the classroom. I had taught before while doing my CELTA and in Vietnam, but a new job is always nerve-racking. The Head Teacher, who would be watching the class, laughed and joked with me as we walked, and kids ran around us like we were part of an obstacle course.

The moment the class started, and all those faces stared up at me, I relaxed. There is something about teaching that makes it different to any other kind of public speaking. No matter how much you might hate public speaking, you might still like to teach. Because you’re there to make sure the children talk, not to talk yourself, it’s far easier. And there’s a lot less pressure.

After that first class went so well, I started to relax before and during classes. I started to get to know the students who would be my regulars and the best ways to talk so they understood. Mostly, that meant not talking. That was the biggest lesson I learned as an ESL teacher, the students probably won’t understand, so show them rather than tell them. That first week was full of important lessons for me as a teacher, but that was the first and the most vital one.

Eating in the First Week

There are several provinces in China and each of them is known for different foods. In Fujian, which is where Fuzhou is located, the food is more sweet than hot. But if you go inland a little, to the Sichuan Province, the food is much spicier and hotter. Even with the sweeter food, eating was still difficult in that first week. Everything tasted different. When I bought bread for breakfast, it had a milky sweet taste that I’d never encountered before. I also couldn’t find a cup of tea that tasted remotely like what I got at home. It’s amazing how much you miss the little things when you’re abroad.

Ordering itself was a lottery. The restaurants with pictures were easier; I could point and smile. But I often found myself going table to table and pointing at other people’s food. The waitresses always followed me, laughing at my attempts to communicate. It wasn’t pretty, but while I was still learning how to order, it got the job done. Unfortunately, it also meant that I often ended up eating meat I couldn’t identify, and strange spices I’d never even heard of. But at least I ate.

Final Tips for the First Week

My first week in China was full of challenges, crowds and confusion as I adjusted to my new surroundings, and my new job. I ate things I wish I hadn’t, found a café that served great tea, and started to settle into my job and with my workmates. It was a chaotic week, and you need to expect that when you move overseas for the first time. You will have nights when you wish you hadn’t come, and nights when you want to pack up and go home. But when you look back later, you’ll probably realise that first week was one of the most fun and interesting weeks of your life. That’s definitely how I remember it.

Do you have stories about your first week as an ESL teacher in China? Share it with us in the comments below.

Gayle Aggiss is an ESL teacher and a dedicated traveller. She has taught in Fuzhou, China, and Hanoi and much prefer smaller cities to the larger options. When she’s not on the road, she lives in Perth, Australia. She writes about education, ESL teaching specifically, and you can view more examples of her work at www.gayleaggiss.com